A Brief History of Cupping

Cupping is trendy now, but it’s not new. It’s really quite old-ancient, in fact. Cupping refers to an ancient Chinese practice that has its earliest “official” roots set in the lifetime of a famous Taoist alchemist and herbalist, Ge Hong (281-341 A.D.), who has the most well-known recorded mention of it. The method back then was a bit different-it used animal horns (not cups) to drain pus and blood from boils. For the Chinese, it became a method to dispel “stagnation” below the skin, such as stagnant (stuck) blood and lymph,  improving the flow of energy throughout the body, and dispelling cold from the channels. The cups would be placed over acupuncture needles for these treatments.  The Egyptians, ancient Greece, and Europe also have utilized cupping dating back to the 18th century.

When all is said and done, regardless of who used it first, cupping is an ancient healing remedy that took-like many old remedies- some popular culture to bring it back to life.

The term cupping therapy actually refers to a number of different techniques, but they all share one common theme, and that is that a vacuum, or suction, (also known as “negative pressure”) is created inside of a cup pressed on the skin. It is different from massage in that, rather than the muscles being pressed down, they are pulled up.

Different methods of cupping use different materials, sizes, and types of cups. For example, some cups are bell shaped, others round, some are glass, others plastic, and so on.

There are ten types of cupping therapies commonly acknowledged among those who practice, but below three of the most general  and practiced forms.
Stationary Cupping:  This can be done with a number of different types of cups Fire Cupping is the  most basic technique. Any combustible material (usually a cotton ball soaked in alcohol is ignited and placed into the cup. As the flame goes out of the cup it is quickly placed over the selected area of the body. The cooling air and lack of oxygen create a slight vacuum, pulling skin, muscle, and fascia up into the cup. The cup can be left on for a range of time, depending on the person providing treatment and what you’re trying to accomplish. Typically, the whole process (from heating the cup to the removal) is around 15 minutes. Other cups used for this include plastic or silicone. With these, the air is sucked out of the cup while sitting on the surface of the skin, sucking the tissue up into it.

Gliding Cupping:   A thin layer of massage oil is placed on the skin. normally one or two cups are then attached and the practitioner  then is able to glide the cups over the muscles, similar to a hands-on massage.

Flash Cupping:  Flash cupping is a technique used to apply suction to the skin in short intervals or ‘flashes’. This means that the cup is placed on the skin for approximately 5 seconds before the pressure inside it is released and it is taken off again. This is repeated along the area that has been selected for treatment.

What Is Cupping Used For?

How Does It Work?

When the body is undergoing a lot of stress-whether it’s the rigorous training routine of an Olympic athlete, or the grueling hours of a jam-packed work week-muscles can get “tight.” Small trigger points of bound up muscle (also called “knots”, although they technically are not) cause pain and sometimes inflammation as circulation becomes poorer and tension builds in the area. By pulling the muscle and the fascia (the thin sheathe which surrounds organs and muscle) one can “break up” the tense muscle. The improved circulation from cupping is also thought to help increase recovery time for strained muscles and help them heal if they have been overused. The thought here is that the more oxygen rich fresh blood you can get circulating through an area, the quicker it will heal/function optimally. 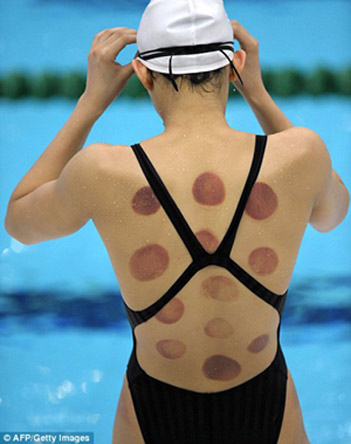 The marks left by cupping are not bruises, per say. Bruises are caused by blunt trauma to the skin that cause capillaries and blood vessels to burst beneath the surface. Cupping does not involve any force that causes a bruise, as it is typically defined.  The Western term for this discoloration is Petechia The vacuum formed by Cupping draws up the old non-circulating stagnant blood and sticky fluids from the area, bringing them up to the surface and away from the injury so that healthy free circulation can be restored to the affect area. Thus making space for oxygen, living cells and nutrients for faster recovery. The discolorations fade from hours up to 2 weeks, depending on the amount of stagnation. Although the marks look painful and similar to a bruise, they are not. Patients typically feel immediate sense of relief, warmth, and change.

You usually will feel a tight sensation in the area of the cup. Often, this sensation is relaxing and soothing. Depending on your comfort and your practitioner’s assessment of the problem, cups may be moved around or left in place. Normally they are left on for a period of 10 to 15 minutes. One very common area to be cupped is the back, although cups work well on other areas too- mostly on fleshy sections of the body. Cupping does cause the skin to temporarily turn red, blue or purple, especially if there is an injury or inflammation under the area that was cupped. the skin discoloration can last anywhere from a few days to a couple of weeks, but is rarely painful. Once the marks have cleared, the procedure can be repeated until the condition or ailment is resolved.

Is It Right For You?

I think it is worth exploring all manners of alternative remedies and healing methods, as everybody has different things that work for them. For those who are afraid of needles, this is an excellent way to avoid that. Personally I think it is best when used in conjuncture with another traditional healing method, such as acupuncture, however, for some cupping alone may be appropriate.

offering acupuncture in the comfort of your home. Offering Tai Chi and Qigong Classes, starting Wednesdays November 3rd, 2021 at Peace United Church of Christ 1503 2nd Ave NE, Rochester, MN Time: 3:30-4:15. Cost is $10 per class, come when you can!